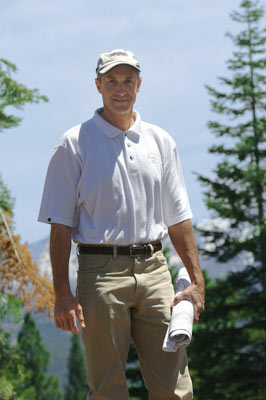 John Harbottle III, the designer of Palouse Ridge, was one of the top golf course architects on the West Coast. He designed such acclaimed layouts as the Olympic Course at Gold Mountain in Bremerton, WA, the Golf Club at Genoa Lakes outside Reno, NV, and the Savannah Course at Stevinson Ranch in Stevinson, CA. Harbottle also remodeled the famed North Course at Los Angeles Country Club in 1996.

Harbottle earned praise for the playability and environmental sensitivity of his creations. The Savannah Course at Stevinson Ranch received a “Best of Golf Award” from Links Magazine and Audubon International, as well as USGA Audubon Signature Status. These awards note significant achievements in the preservation of natural resources and wildlife conservation, scenic beauty, playability, and tradition. Much of Harbottle’s design philosophy was based on his study of courses in Scotland, which fit closely into the lay of the existing land. He strived to make the best use of natural features and to ensure that artificial ones created were indistinguishable from nature. Every effort was made to create a course that is challenging, but also enjoyable for the average player.

Harbottle formed his own firm, John Harbottle Design, headquartered in Tacoma, WA, in 1991. He was a member of the American Society of Golf Architects, the Donald Ross Society, the United States Golf Association, and the National Golf Foundation.

Harbottle’s mother, Patricia (Lesser) Harbottle, was the 1955 National Amateur Champion, while his father, John, is a five-time winner of the Washington Senior Men’s Amateur. Harbottle’s golf-design mentor was Pete Dye.